Following recent announcements performances are currently suspended until 28 January. All ticket holders will be contacted by their point of sale. Performance cancellations are being reviewed on a rolling basis.

Our ticketing team will be in touch about bookings during the affected period. Please bear with us during these very busy times and continue to support us by staying with us and exchanging your tickets for a future performance. WE WILL BE BACK.

Out of the darkness…into the spotlight…back to the place where we belong.

Everybody is talking about the West End’s first major musical to reopen. With a hotly-anticipated new film adaptation due to be released in February 2021, be one of the first to see Everybody’s Talking About Jamie as it triumphantly returns to the Apollo Theatre and celebrates its 3rd birthday!

Inspired by a true story, Everybody’s Talking About Jamie is the award-winning hit musical for today – bang up to date, more relevant than ever and specially updated for the times we live in today.

Jamie New is sixteen and lives on a council estate in Sheffield.
Jamie doesn’t quite fit in.
Jamie is terrified about the future.
He is going to be a sensation.

Supported by his brilliant loving mum and surrounded by his friends, Jamie overcomes prejudice, beats the bullies and steps out of the darkness, into the spotlight.

Noah Thomas, Melissa Jacques, Sejal Keshwala, Hiba Elchikhe, Gillian Ford and Phil Nichol as Hugo/Loco Chanelle, lead the show’s return back to the West End, with a twenty-five strong company and a nine-piece band that will ‘sweep you away on a tide of mischief, warmth and exuberance’ (Financial Times).

With ‘songs that have the wow factor’ (The Times) by lead singer-songwriter of The Feeling, Dan Gillespie Sells, and ‘hilarious’ book and lyrics ‘with delightful punch’ (Whatsonstage), by writer Tom MacRae, this funny, feel-good, musical sensation is ready to be your much-needed glitter in the grey as it reopens at the Apollo Theatre. 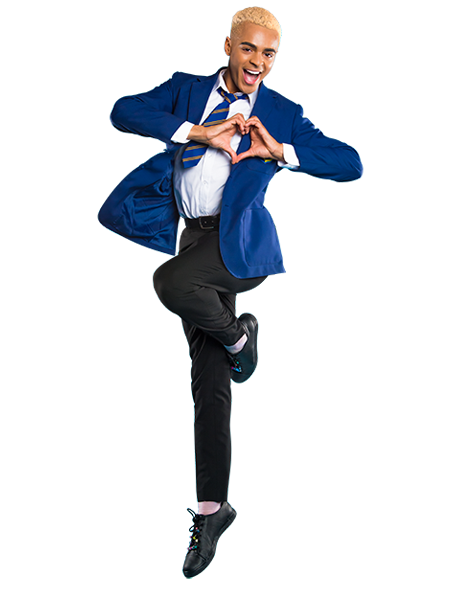 JamieMusical @JamieMusical1 week ago
We hope you got everything you were wishing for this Christmas! ❤️ 👠 #JamieLondon https://t.co/61nRmSybjG
Reply   Retweet   Favorite

JamieMusical @JamieMusical2 weeks ago
Our final winner for #12DaysOfJamie is Anne who suggested ‘It’s a Wonderful Life (and you don’t even know it!)’. Th… https://t.co/7b6TDguCA1
Reply   Retweet   Favorite

JamieMusical @JamieMusical2 weeks ago
Day 12 of #12DaysOfJamie & the final prize is tickets to come and see us when we reopen at the Apollo Theatre! Cong… https://t.co/ZUpHu9sCuE
Reply   Retweet   Favorite

JamieMusical @JamieMusical3 weeks ago
We are spoiling you as today is Day 4 of #12DaysOfJamie and today’s prize is from The Paper Gang ! Keep telling us… https://t.co/nBxweKrM82
Reply   Retweet   Favorite

JamieMusical @JamieMusical3 weeks ago
Yesterday’s announcement delayed Day 3 of #12DaysOfJamie but the festive fun will go on and today’s prize is from… https://t.co/RpFQiiAWLk
Reply   Retweet   Favorite

JamieMusical @JamieMusical3 weeks ago
Please see our update on the Government announcement that London will be going into Tier 3 from Wednesday.… https://t.co/p8OWWVUkME
Reply   Retweet   Favorite
Follow us @jamiemusical