Michelle is an internationally renowned, platinum-selling recording artist, actress, author, television personality, podcast co-host, radio show host, who has made a name for herself in the entertainment industry, across multiple mediums for the past three decades. She is best known in the UK for being a judge on Ireland’s Got Talent and America’s hit TV show RuPaul’s Drag Race, which recently won Outstanding Reality-Competition Program at the 2018 Primetime Emmy Awards. Michelle was a finalist on Celebrity Big Brother in 2015.

Michelle Visage said: “I am BEYOND thrilled to be making my West End debut in Everybody’s Talking About Jamie! The reason I chose this show, in particular, is because of the very important message it tells. It is a great show with great music and talent but more importantly, it’s about love, truth and the tenacity of the human spirit!”

Please note: Due to Michelle Visage’s filming commitments as a judge on Ireland’s Got Talent 2018, she will not be performing between Tuesday 20 – Thursday 29 November 2018. 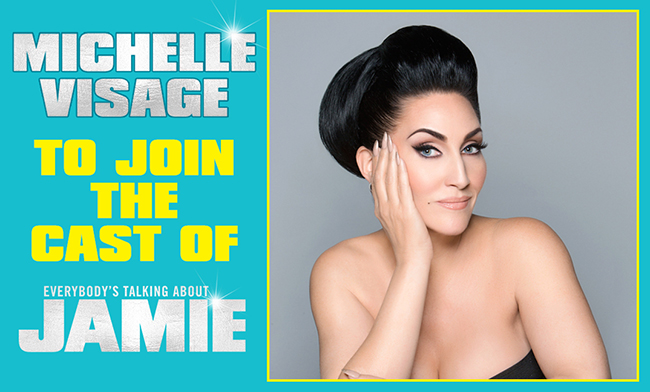